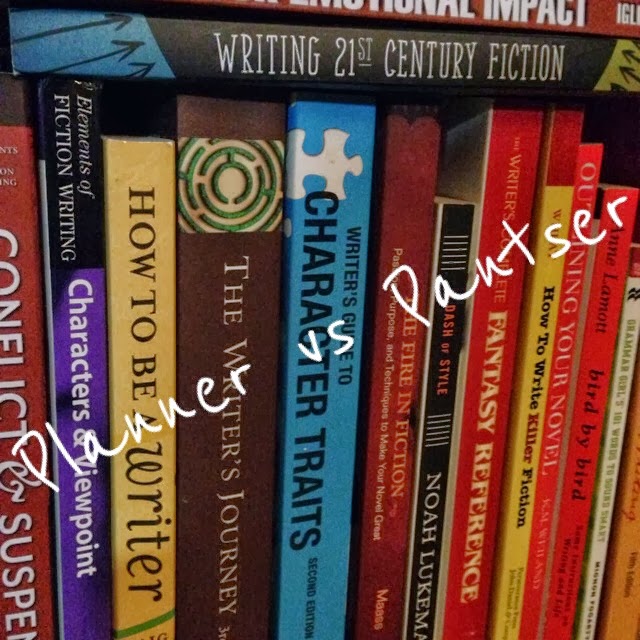 Generally, there are two different writing styles people tend to fall into: the Pantser and the Planner.

The Pantser does everything by the edge of his seat (hence the name) and has a vague idea of what is going to happen in his story, the characters, villain, etc. This person enjoys the thrill of the unknown and coming up with what will happen next in the moment. This can be particularly good if the story takes a mind of its own and goes into uncharted territory, somewhere completely different from what the writer was expecting.

The Planner likes to plan everything out–outlines, character sheets, settings, story arc, etc. There could be a lot of detail or a rough sketch of things, but the Planner still knows where the story is going and whether they allow for some leeway or not is up to them.

I am a Planner, so this will mainly be on the tricks I’ve learned over the years and I apologize. The again if you’re a Pantser you won’t want to go into much detail anyway. So I will throw everything out and you guys can pick whatever you find helpful and works for you.

Browse through some images.

DeviantArt has some amazing art that can really inspire great stories. If you can get access to old photographs or postcards theres always a story or two hidden in each, waiting to be told. Get an idea of what you want to be writing about and throw some ideas around.

Pick out a soundtrack for your novel.

I love doing this. For each novel, I pick out a soundtrack to go along with it. The songs can be from different scores and albums or stay on the same one. I generally will select one soundtrack to be the “theme” and mood of my book, but will also find songs of a particular emotion to help me write specific scenes. For example, my book Shades of an Idle Wind was set to the score of Nomad, but I used music from Tutors, I am Legend, etc to write sad scenes.  The forums on NaNo have some great suggestions for music, or you can post your own thread asking for suggestions.

Random ideas, things you definitely want to happen in your book, specific attributes of characters,whatever it is, write it down and put it on a sticky on your wall or on a notecard or in a list where you can see it. They’re helpful reminds and they can really help mold your story.

I came up with this idea this year. Basically I have a jar filled with jumbo popsicle sticks that have different prompts I need to accomplish to help switch things up and get my creative on. I have more on what I include here.

I love outlines. I love lists. I am absolutely, positively addicted to them and need to have them if I want to stay sane. Some people write loose outlines that explain vaguely who the character is, what the goal is, a bit of what happens in the beginning, some of the middle, and some of the end. Some people have very detailed outlines from start to finish, going into every possible detail that happens at each moment. Others have bullet lists of what they want to see accomplished in the novel and let it flow when they feel it is a good point to do so.

Outlines can be good or bad depending on the person. I like to think that it really helps get you going, you already know where you’re going with this story so it takes that pressure off. It also allows you to go through and fix any bits you don’t like fairly easily. One of the bad things that could happen is that it could stifle your creativity. Some people are so strict to a point, they will not alter their path even if the story seems to be going a different direction once written.

I like to have a very, very detailed story outline, but I am not afraid to stop and change things if I feel it’s just not working. Things can always be changed and it is your story so have fun with it. If you decide to scrap something, keep it in a separate document. You might find it has another place later on in the story.

When writing your outline or story, constantly ask  yourself, “What if?” Throw anything and everything out on the paper. You will like some of the things, you will not like some of the things, but it can really add flavor to your story. Just sit down with a pencil and paper, and write whatever comes up in your mind. I keep a little notebook that’s just filled with these. Don’t worry if it sounds stupid, no one is going to see these but you. Just let your mind go. Try to push it farther each time, making the situation worse and worse.

For example, you have this female character who is in her teens. What if she grew up in an amazing home with an amazing family. What if she ran away? What if she was caught doing something illegal? Got into a car accident? Woke up in an unfamiliar place? Discovered something of great importance? Is now running for her life?

These ideas will take you deeper into your story and your character. Ultimately, it will bring you to another question: why?

Keep a notebook of all the information you sorted out.

I have a binder that includes all of my character and world information as well as my outline. Every idea I come up with, my sketches, what if’s, etc go into this binder. I also have a thin, soft-back moleskin that fits nicely into the side of this binder with all my original brainstorming and continued brainstorms. Don’t lose your stuff! You might find a need for it later on! If you start your story out one way, change it, and don’t like it, you can see what ideas you had going on in your head early which might work better.

More in this series:
–NaNo Prep: The Basics
– Pantser or Planner: Ways to help prepare you prepare for your story.
– The NaNo Jar.
– Food Prep: What to eat and the easiest way to do so.
– A Space of Your Own: Creating solace in a time of chaos.
– Holidays and Family: What to do when you have to go out.